Two days ago I wrote about Clean Freak on HGTV, and instead of just letting the days go by and considering ways to improve my overall organisation, I decided to start with some small stuff that would be very impactful for me in trying to create a more organized and clean environment. Today I went to The Container Store (my favourite store) to get lipstick holders . I ended up getting a few more things but they turned out to be major in my closet re-organization. I’m going to jump right into it! 🙂 (the first picture is what I bought).

I’m going to start with this because it’s what I went there for in the first place lol. I was eyeing a lipstick holder on Amazon but it was for 60 pieces. I thought no way! I don’t need that many and I went and started counting every single one of my lipsticks/lip glosses/lip balms and sure enough I had over 30 but I still didn’t want to buy the one for 60. So I checked online and The Container Store had one to hold 24 so I bought two after a friend suggested I do that with the possibility of stacking them. I can’t stack now because of the type I bought and the different heights of the products but at least now they’re neatly stored! 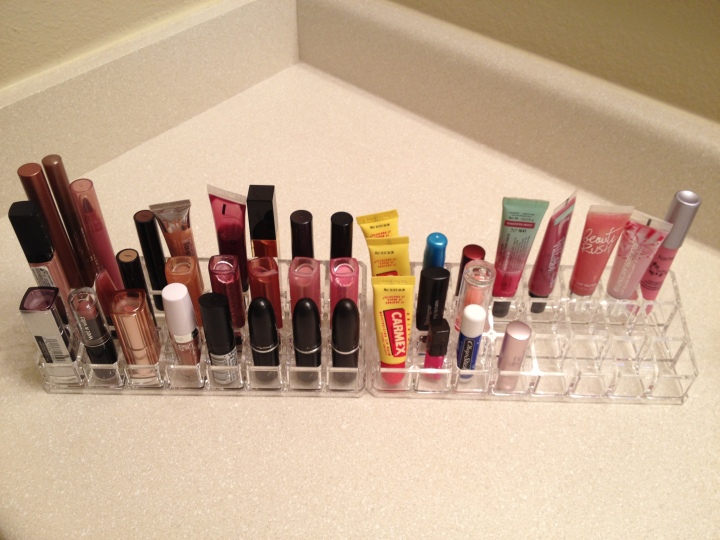 As I said before I wanted to move my scarves to the accessory belt and get proper belt hanger for my belts. I bought two belt hangers today – one for my belts and one for my necklaces. I sorted my belts first as there are a few to get rid of that I never wore or liked. I also have a few belts that do not have anything for me to hook them with so I closed them up and put them on one of the rings with the scarves. 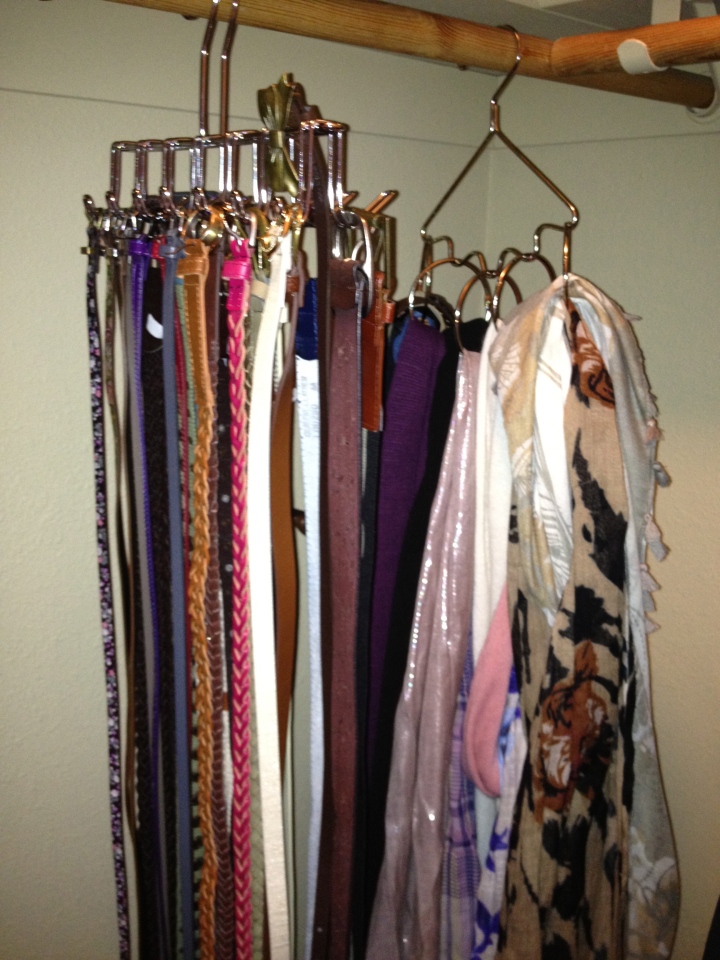 The lipstick holders were practically next to the jewellery stuff, and since I’ve been saying for years I need something to store my jewellery properly, I decided to have a little look at what was available. I bought a spinning bracelet holder, an earring rack and as I said before, a hanger for the necklaces. I haven’t transferred all of my necklaces as yet because I have a few that I no longer wear and I really want to sort through them. I still need to find something for my bangles but I just may end up getting one of these considering their shape. I wanted to go to Michaels to see if I could get creative and make up something on my own but laziness may get the better part of me. Below you will see a round mason jar with earrings on it and stuff on the inside. As I was taking pics today, I realised that before Pinterest, I was coming up with my own uses for mason jars outside of the kitchen! (This is what gave me the idea for the title of this post :)) Anyway I needed something else for the earrings as I had more than when i first started doing this and obviously all couldn’t fit. I cleaned out most of my kitchen cupboards Saturday and that’s when I’d placed this lovely vase on the dinning table with some other stuff to go somewhere else. I decided to use it because the earring holder I bought wasn’t able to accommodate all of my long earrings and store all of my costume rings on the inside (2 for 1 ;)). I was about to return it when I realised I still needed something for my studs so I decided to keep it (I know it looks scanty but I prefer long earrings and don’t want my studs laying around anymore). 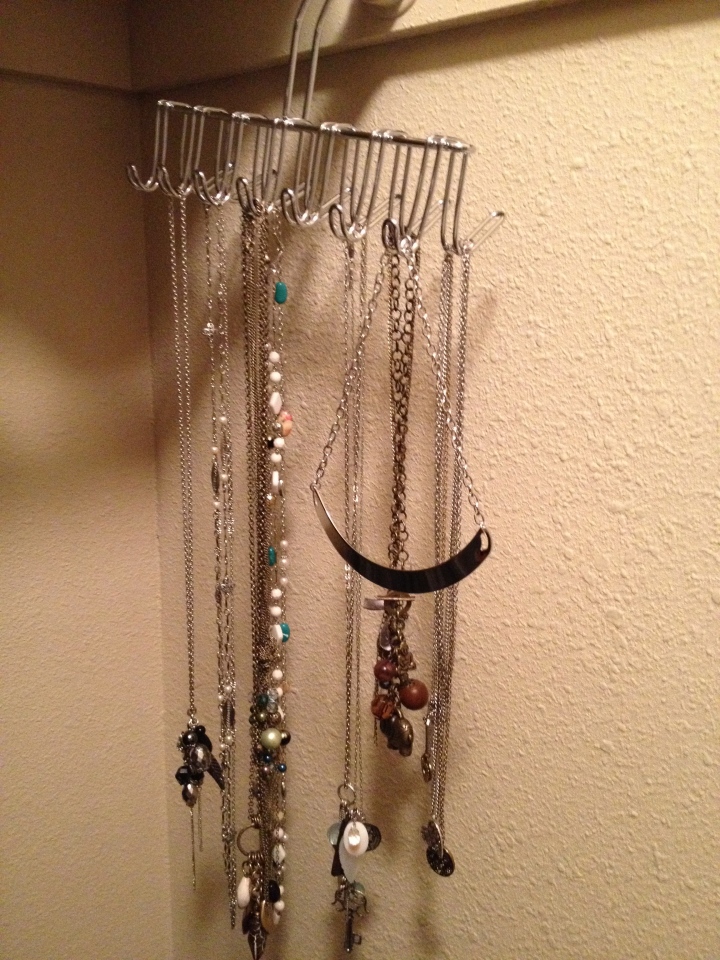 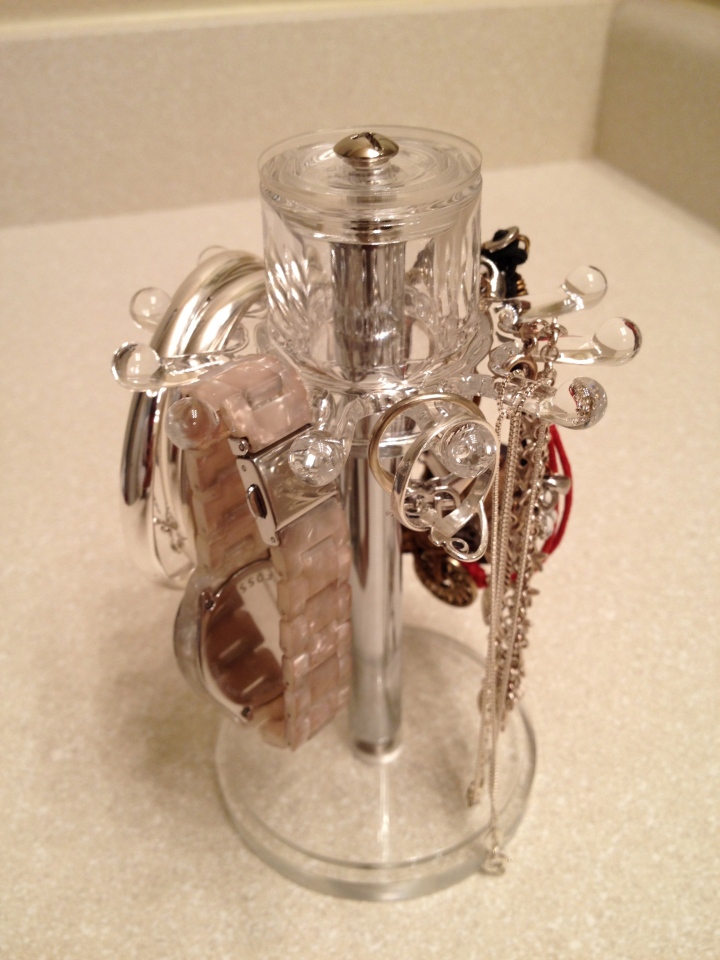 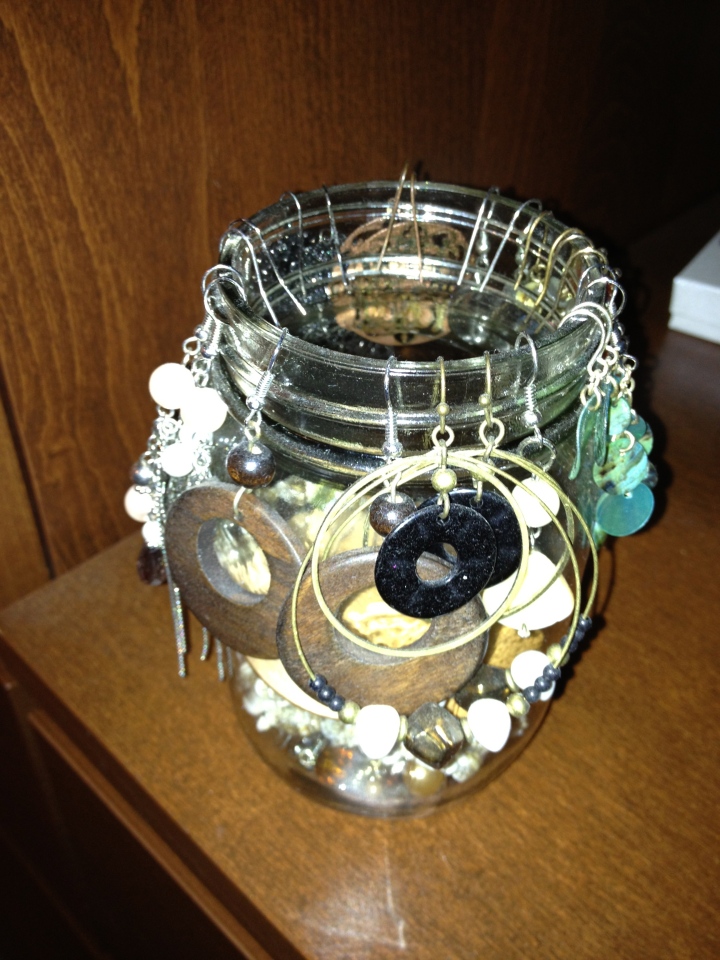 These strips here are another piece of what this title is all about. I had bought a piece of this plastic (I never  remember the name of it) to hook my long earrings on just to keep them together. What I also did was cut smaller pieces to attach all of my earrings to when travelling. This way I know they’re all together and I don’t have to worry about the being scattered all over a bag.

I hope you enjoyed this little post as much as I enjoyed putting it together. 🙂