I figured I’d take the time today to just throw some random stuff out there 🙂 and thank you for your support of my blog of rambling.. it’s just a dash of everything after all ;).

I finally got black flats! *Yay!* I don’t remember if I mentioned what happened to the last pair I bought but it basically went like this:

I went to the mall while my husband had a casual business meeting, so while I was waiting for him to pick me up after I finished what I went there to do, I was walking around Nordstrom looking for some flats. Spring was around the corner and I wanted some as I was tired of boots. At first I called him and told him to come inside because I couldn’t decide on a pair, then I found a pair and told him don’t bother, I’ll meet him outside so he doesn’t have to park. When we got home, I tried on the shoes and showed him… you can basically say he fell off the chair laughing.. (*side note* my husband thinks all flats are granny shoes and they all look bad but some just look worse than others) He told me to return them and we’ll go shopping for a pair together. Now, I know my husband and I knew he wasn’t going to go so it took me a little while but I kept looking and I found these babies: The Cole Haan ‘Air Monica’ Ballet Flat *Angels singing: Ahhhhhhhhhhhh*

Having these shoes are major for me right now because I’m supposed to be taking a break from heels. I twisted my ankle 3 times (yes 3, in a row) running to the car in my shoes on my birthday night… please don’t ask what happened, it just happened… So my chiropractor asked me to take a break, I can wear heels if I have to but preferably wear flats. *sigh* But these are super comfy! I was looking at the Tory Burch flats but they were rubbing on my big toe on the right foot and had to be broken in, I wasn’t paying $200+ to break in shoes so I made sure I got a pair I could run a marathon in.

Next, I got highlights. No pics yet, I’m getting a cut in two weeks when I go for my relaxer so I’ll post a pic of that then. I’m really excited about my hair and miserable at the same time. Last weekend I was a bit obsessed with a certain hairstyle.. plaits! I washed my hair Friday and seeing that it’s always puffy, I tried to tame it and do something different. I was tired of the middle and side part and was definitely not curling it so I decided to do two plaits and pull them back. Saturday was a single plait across the front, and Sunday ended the little phase with two again.  Hubby decided he doesn’t care if I grow or cut but just don’t go pixie short again. I think I’ll go through with growing but I am getting frustrated and I will continue to look for ways to not feel as bored with it. Here’s a pic of Friday’s hair and outfit :). 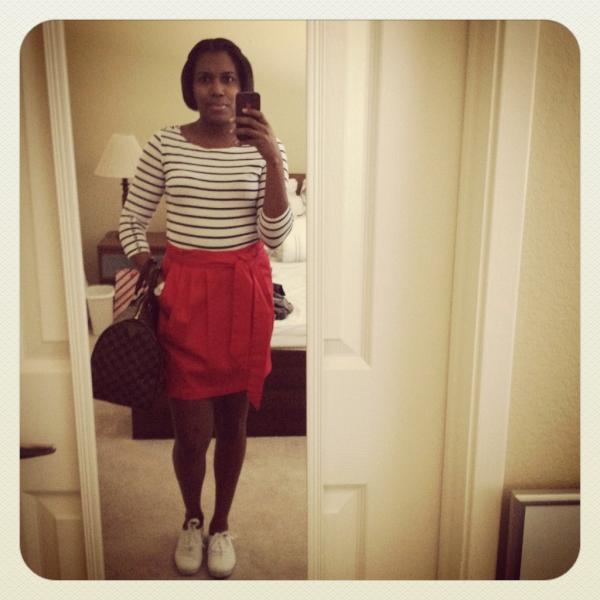 Speaking of clothes, I ordered some shirts for my husband. He’s a software engineer so he’s pretty casual with what he wears to work and he loves shirts that have sayings on them. I ordered from a site that when you buy 3 you get 3 free so I got 5 for him and one for me. I’m dying to wear this shirt to a vegan place or somewhere where people aren’t huge fans of meat (is that mean? if it is I’ll only do it once ;)).

I have another shirt coming and I can only post that when hubs wears his as well as we’ll be matching and it’s kind of nerdy lol. I’m turning into a slight nerd since he makes me find out a lot of technical stuff on my own and only helps if I really fork it up lol.

I got my nails done yesterday before highlights. I was trying liquid gel over my natural nails and that didn’t work out. You see, I don’t believe in wearing gloves while washing up because I like to feel the surface of things to make sure the soap is off as well as any fine residue. Even when I use my dishwasher I’m running water over the wares before I put them in and I’m always washing my hands, so even though my nails are hard, they weaken with the water and break and split. So yesterday I decided to just put gel powder on them since that’s the only thing that does last longer than anything else. I had to get tips and cut off my nails as the girl took off a lot of my natural nail removing the liquid gel. I like my nails to look nice, I don’t always make a full on effort when I leave home but I think certain things should be… kept – eyebrows and nails. I went for a slight barbie pink and got quite a few compliments on it. I’ll keep these up and hopefully grow out the tips and just keep the gel on with my natural nails.

Oh I forgot to update! Hubs said he would do my make-up but not on camera *womp* I’ll see if I can get him to do it but hide the camera lol. And last but not least, I’m becoming a Belieber… if you don’t like this song, something is wrong with you!